Multi-Layer, Common, Thermal or Long-life plastics with excellent mechanical properties that facilitate installation and resist temperature variations throughout the year

Poly-Hort BV is responsible for sales, service and support.

Polyethylene films produced by Politiv Ltd in Israel and Insect Net .
It is used in Europe, Asia and Oceania.
Politiv Ltd was founded in 1985 and has over 30 years of experience.
innovative mindset. Poly-Hort belongs to the Politiv group.
Polyethylene film is widely used in poly greenhouses, poly tunnels, warehouses, soil disinfection and solarization, mulch film, etc.

• Flexibility for minimum order (1.5 - 2 tons depending on product type)

• option to install a film rewind machine and distribution centre. Machine used to rewind master rolls into smaller rolls according to customer demands

Politiv has a quality management system and operates according to the ISO 9001:2008 standard.

• In order to guarantee a high level of product quality, the quality control laboratory meets the samples during production and the required quality requirements 24/7. Every movie order sample produced

kept in the archive for at least 4 years.

Poly-Hort BV Polyethylene film as greenhouse cover can be divided into the following parts:

greenhouses such as light, temperature and humidity

The main purpose of the poly greenhouse/tunnel:

The main purpose of the Poly-Hort BV Poly greenhouse:

• Creating a controlled and consistent microclimate for light quality,

To control the temperature and humidity inside the greenhouse independent of the outside climatic conditions. A controlled climate means higher yields.

• Protection of the product.

• Development and extension of the growing season.

• Temperature: to influence the temperature during the day and night

Greenhouse film can be provided with the following features:

• UV stability (determines the durability of the film)

• Thermicity (film to minimize heat loss in the greenhouse)

The film must withstand high loads such as wind, rain, snow, hail, and extremely high temperatures, cables and ropes, etc.

Standard Polyethylene films are not resistant to all these climatic effects and must be adapted to:

It was introduced in 2008, almost all films are based on this material. Most advanced Polymer on the market and only 1 manufacturer (Exon Mobile)

- UV-B: medium wave 280-315 nm: UV clear films allow 85% of this radiation to pass. Glass and standard films almost do not allow this range to pass.

-UV-A: long wave 315-400nm: UV-clear films allow 85% of this radiation to pass. Glass and standard films almost do not allow this range to pass.

Using mineral fillers in the film, the light is refracted and dispersed in different directions.

The transparency of the film is not a criterion of light transmittance.

Diffused light is very important for the development of the plant.

Diffused light reduces shadow so the plant can receive more light for PAR than outside light spectrum light.

We use UV stabilizers to protect the film. These are contributions to the movie.

In the production process to ensure the durability of the film.

Disruption of the film

Aggressive agrochemicals such as Sulfur (S) and especially Chlorine (Cl),

- Due to the loss of strong mechanical properties, the film is torn and easily broken.

Cause of film degradation:

• Growers use sulfur (cheap material, organic) to fight diseases such as mold, especially in the production of strawberries and roses abroad.

• Use of Growers Chlorine sprays (to prevent disease) as disinfection after each crop change.

• Adjustments in the use of pesticides used by growers (legislation)

Cause of film degradation:

• Growers use sulfur (cheap material, organic) to fight diseases such as mold, especially in the production of strawberries and roses abroad.

• Use of Growers Chlorine sprays (to prevent disease) as disinfection after each crop change.

• Adjustments in the use of pesticides used by growers (legislation)

It is to prevent the film from the greenhouse from deteriorating and being damaged. The following points should be noted:

• Care must be taken to avoid sharp edges that may come into contact with the film to prevent damage to the film.

• All (black) metal or wooden parts must be painted with water-based white paint.

• rusty parts of the greenhouse structure should be replaced so that the film does not deteriorate,

• Use of film in impregnated wooden structures (Halogens),

May cause deterioration as UV-stabilizers are affected

• Preferably all steel structural parts need to be galvanized

In some parts of the world there are large variations in temperature during the day, and

night temperature, the formation of fog in the morning may appear in the greenhouse.

The anti-fog additive films the fog and the anti-condensation fog flows into the gutters as a layer of water.

It can have a negative effect on the anti-condensate.

Only in the right percentage and in the right combination the anti-fog and anti-dust work correctly. Otherwise, the anti-condensation function will be lost.

This movie was developed according to a new technology and concept .

No anti-static attachments will be used, which will disappear after a short time.

The anti-dust additive will remain active for the lifetime of the film.

This option is often used for poly tunnels in outer layers to get rid of dust and dirt.

The result is a higher light transmission. In addition, a smooth film surface

The film is easier to clean.

In countries with long sun hours, the temperature in the greenhouse may be too high, thus stressing the plants.

The following measures can be taken to prevent high temperatures in the greenhouse:

• Shadow nets over the film

• Providing the film with “White Wash”

Reflects most of the NIR light (near infrared)

25% depending on geographic area and product.

By reducing the NIR radiation (near infrared), the temperature will drop in the greenhouse.

When the light touches the film, the light can pass through the film directly.

This depends on the composition and particle size in the film.

Light is reflected and is a problem for light transmission. Transmission percentage

depends on the reflection index and the particle size.

For some rose varieties, UV light can cause hyper-pigmentation,

By blocking the UV range up to a wavelength of 380-390nm, it strongly reduces the presence of dark spots (darkening) on roses.

To open the UV range from at least 320nm, it is necessary to develop bicolor roses, nectarines, red leaf lettuce Anthocyane pigments (red).

Anthocyan pigment needs UV light to give color. Anthocyane gives its purple color to some.

Film with a UV filter causes problems with coloring for these products.

Therefore, a UV film must be used.

The choice of film genre depends on the following factors:

- Is it the growing season, all year round, or only in summer or winter?

- How many seasons / years should the movie run?

- Is there an anti-condensation / drip film?

-Film with EVA for cold climates.

- Geographical location of the project in relation to UV radiation, temperature, number of sun hours. In Northern Europe, for example, there is less UV radiation.

- Type of greenhouse structure, does the greenhouse cover consist of two layers or a single layer?

- What width and thickness of the film is needed?

- Are chemicals such as sulfur and chlorine used in the greenhouse? 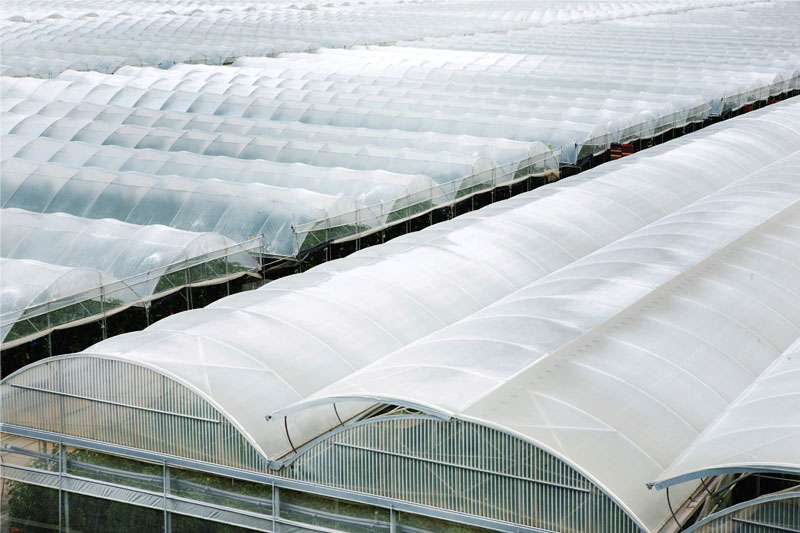